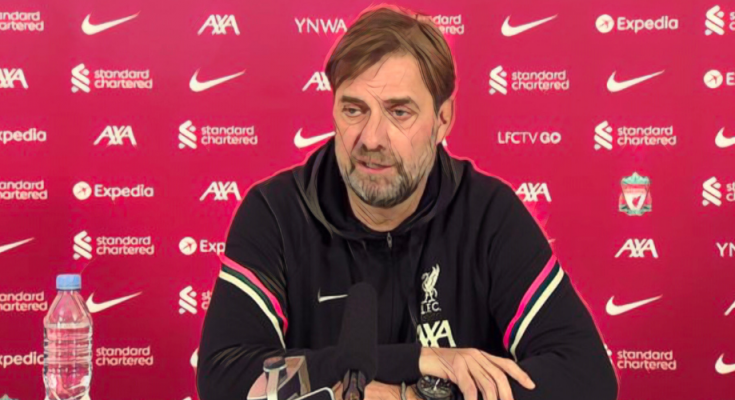 Jurgen Klopp insists the Merseyside derby is just a ‘normal football game’ for Liverpool as the club take on city rivals Everton in midweek.

Liverpool travel the short distance across Stanley Park to face Everton on Wednesday night with the two sides in contrasting form at present, the latter in the midst of a seven-game winless run in the Premier League under former Reds’ boss Rafael Benitez.

Klopp’s side moved within two points of league leaders Chelsea after beating Southampton 2-0 on Saturday and the German is hopeful his side can maintain their momentum ahead of the trip to Goodison Park.

Klopp insisted that his side will treat the clash like any other game, however, despite the excitement amongst the club’s supporters.

“There are some ‘special’ things around derbies. First and foremost, it’s a football game as well – that’s exactly how we will approach it,” Klopp said at his pre-match press conference.

“We know what our supporters want, their soul. We try to fulfil their dreams, their wishes and derby games are more in-focus but from our point of view, it’s a football game.”

Klopp dismissed the suggestion that form goes out of the window in derby clashes and is hopeful his side can showcase their best against the Toffees on Wednesday night.

“Form matters,” said Klopp. “Especially when it is good.

“We play good football and that’s what we have to do tomorrow night and if we do that then we are difficult to play, it’s exactly the plan we have.”

Jurgen Klopp admits he was 'surprised' that Mo Salah didn't finish higher in the #BallonDor standings and couldn't quite believe that the top prize didn't go to Robert Lewandowski. pic.twitter.com/GL3nNwlG5W

Everton’s poor run of results has led to unrest amongst the fanbase, with the supporters voicing their unhappiness following the weekend defeat at Brentford.

Klopp said that he watched the clash with the Bees, but turned off before the angry reaction of the fans following the full-time whistle.

“We have three points at stake. We just try to win it, nothing to do with their ‘special situation’ over their coach or whatever. It’s nothing new in football,” the German said.

“I watched the game but switched it off after the final whistle and had no idea exactly what happened there but these things happen when you don’t get results and supporters usually tell you. it’s not that easy to deliver the message differently.”

Liverpool have been in scintillating goalscoring form of late, and are averaging two goals-a-game to date this season, though Klopp insists his ‘mindset’ is just getting the job done despite the glut of goals.

“It is nice to watch when you score goals but when you are one nil, two nil up it’s not really enjoyable, it’s just work to do,” said Klopp.

“That’s what we have to do put of course, some of the goals are really nice but I’m not seeking for joy around football games – I can enjoy them when I watch them back – but during the game I’m now really in the mindset for the that.”