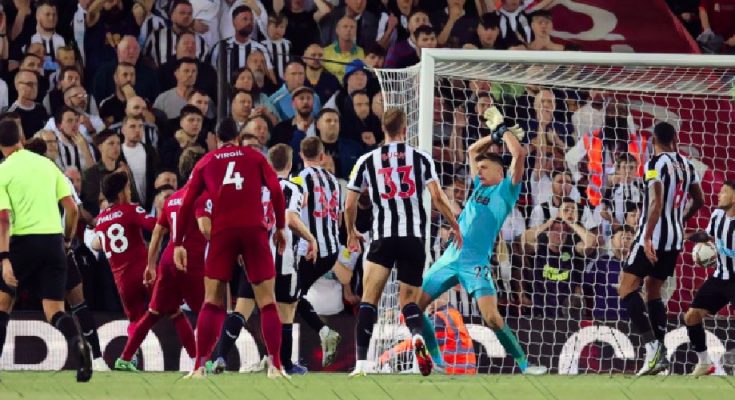 Liverpool netted a 98th minute winner to complete a come-from-behind victory over Newcastle in an entertaining game at Anfield.

Having kicked off the campaign without a victory in their first three Premier League fixtures, Liverpool finally hit their straps after they thumped nine past Bournemouth at the weekend to finally kick start their title challenge.

Newcastle, however, have enjoyed a largely positive start to the campaign, and the two sides played out an even and entertaining open spell in which both showed plenty of attacking intent.

In a fixture that provokes memories of Premier League classics from years gone by, it would be the Magpies who struck first blood. Sean Longstaff threaded the ball into the path of new club-record signing Alexander Isak, with the Sweden international getting in behind some sloppy Liverpool defending before lashing home with what was his first shot.

Isak thought he bagged another 10 minutes after the break, producing some excellent centre-forward play before firing past Alisson, only to see it chalked off for a narrow offside.

Liverpool upped their intensity though, and in the 61st minute, they finally got themselves level. Harvey Elliott released Mohamed Salah down the right before the Egyptian picked out the run of Roberto Firmino into the box who fired home first-time past Nick Pope – the Brazilian’s third goal in two outings.

The hosts continued to push forward, and just as it looked as if they were set to drop more points, they stepped up to slam home a 98th minute winner. A James Milner corner from the right triggered some penalty area pinball, resulting in the ball dropping to youngster Fabio Carvalho who struck a sweetly hit volley in off the underside of the bar to send Anfield absolutely wild.

WOULD YOU BELIEVE THAT! 😱😱😱

Fábio Carvalho scores with practically the final touch of the game to earn a vital three points for Liverpool!

“The perfect moment to win this game because it was a difficult game, very passionate, aggressive defending,” he told BT Sport.

“It’s difficult to pick up the rhythm from a game where everything clicked immediately and you find yourself in situations where it isn’t clicking immediately.

“Even before we were 1-0 down we looked in situations a little bit desperate. We had to force ourselves to keep calm a little more and keep going. In the end we forced it and what a wonderful goal from the birthday kid.

“This is the best way to win a football game. I think that we scored after 90+8 is the perfect response. I’m really happy about that.”

The German drew similarities to the Reds’ 3-2 win over Newcastle back in May 2019.

“It’s massive, massive we will remember it for years and years,” he said.

“We had once a 3-2 at Newcastle where Divock Origi scored late. I’m not 100% sure they all believed until the end but from now on we have to as we showed again it is possible.”