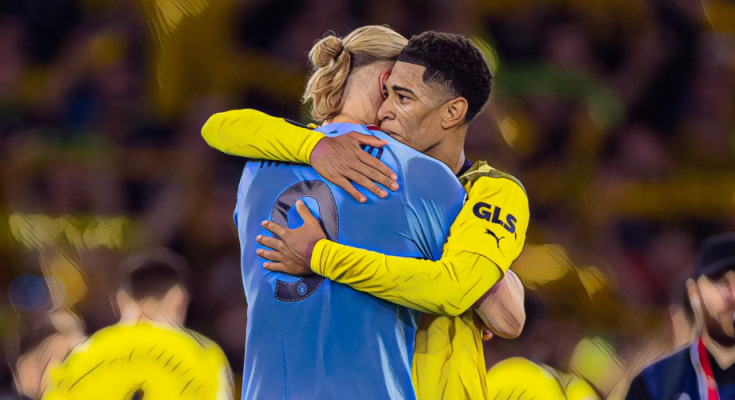 Erling Haaland has urged Jude Bellingham to join him at Manchester City next summer as Europe’s top clubs chase the signing of the Borussia Dortmund midfielder.

Bellingham is set to be subject of interest from a number of leading clubs next summer with Liverpool and Real Madrid understood to be among the frontrunners to sign the teenager.

Liverpool have a long-standing interest in the England international, while Real Madrid have reportedly made Bellingham their top transfer target for 2023 as the Spanish side continue to pursue European football’s brightest prospects.

According to the Mirror, Haaland has now made a plea to Bellingham to join him at the Etihad. The Norwegian spent two seasons alongside Bellingham at Dortmund and is understood to have urged the midfielder to move to Manchester City next summer.

Pep Guardiola was full of praise for Bellingham after the 19-year-old scored in the Champions League meeting between City and Dortmund earlier this month.

“I was impressed two seasons ago when he was 17. Now he’s 19… he was good at 17, imagine now at 19,” Guardiola said, as per 90min. “He’s able to follow [Ilkay] Gundogan, Kevin [De Bruyne], win the duels, transitions are fast, to have the sense in the box for the goal he scored.

That clash ended with Bellingham and Haaland pictured in conversation, after the latter’s late goal sealed the points for City at the Etihad. Manchester United and Chelsea are also said to be interested in Bellingham in a transfer tussle that looks set to dominate next summer’s window.