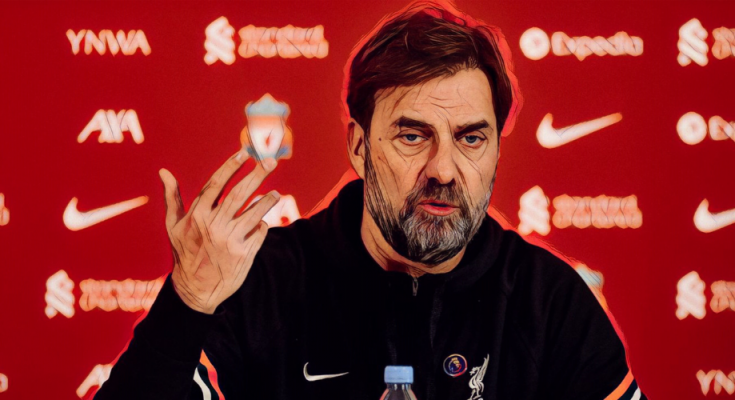 Jurgen Klopp has hammered the English media for their coverage of Trent Alexander-Arnold’s England exclusion.

Alexander-Arnold has been in the headlines this week after failing to feature for England during the international break, despite being called up to Gareth Southgate’s 28-man squad for fixtures with Italy and Germany.

The 23-year-old has made just one international appearance for England in 2022 and faces a fight to make the Three Lions’ World Cup squad for Qatar this winter.

Klopp gave his view on Alexander-Arnold’s exclusion from the squad and the subsequent reaction from the English media, blasting the unhelpful coverage.

“You really want to open this box? I mean it, you are an English journalist and we cannot discuss selections until the World Cup starts, it’s one of the reasons why you make massive stories of these things,” Klopp said at his pre-match press conference ahead of Liverpool’s clash with Brighton.

“Why the team cannot prepare properly. If you ask me for my honest opinion, you will create headlines, it’s clear. It helps Germany, maybe, it doesn’t help England. I don’t know why we do that.

“A manager picks a player, or not, which I would obviously decide differently but I’m not in charge of this team and that’s how it is. If you want to discuss it, I have a lot of things to say but I’m not sure it makes sense.

“We are fine here because it’s completely different because I see him differently. It’s obvious.

“There are stories out there all the time that talk about him and say he’s not a good defender, but that’s not true. He is a good defender, he doesn’t always defend good, that is true as well, but that is what we’re working on, he is a young player, he is 23.

🗣️ 'Trent didn't come back in a party mood!'

“There is space for improvement, definitely, but we only discuss it on the level we discuss it because his offensive impact is so extreme for us, it could be for each team in the world.

“My point of view, it’s an easy pick. Whichever team I would coach in the moment, I would sign him because he is exceptional. Is he always exceptional? No.

“The rest now is that it is Gareth’s job to find a team, and England is obviously blessed with a lot of really talented players in a similar position and it’s difficult to line them all up together.

“In this case, it could work, Reece James can play in a three in the back and that would be interesting to see how they could interchange positions. The only thing I can really say is that I see it differently, but that does not mean it is right or wrong.

“For Trent, he came back and accepts the decision of the manager because he understands football pretty well, he’s an extremely smart boy. As a player you can never do more than offer what you can offer.

“In football, there is one guy who decides if that is good enough or not and that’s the manager. Here, more often than not it’s the case he is picked and for England, obviously, not.”