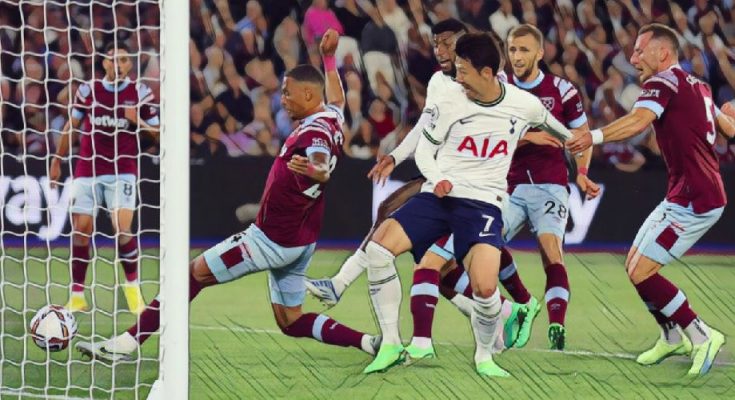 Antonio Conte bemoaned English football’s use of VAR as Tottenham were held to a 1-1 draw by West Ham at the London Stadium.

The two London rivals came into the game following contrasting starts to the season, West Ham having lost three of their first four games, while Spurs were one of just three Premier League teams to still be unbeaten, with three wins and a draw.

It was a decent start to the game with both sides showing their attacking intent, and Spurs thought they would have the chance to open the scoring after they were awarded a penalty for a handball by Aaron Cresswell. After what seemed like an absolute eternity, referee Peter Bankes reviewed the pitchside monitor to overturn his decision.

Spurs did take the lead in the 34th minute, however, as Harry Kane played the ball out to Dejan Kulesevski down the right, before the Sweden international laid it off to find Kane’s overlapping run. The England skipper squared the ball across the box towards Heung Min Son, with Hammers summer signing Thilo Kehrer putting into his own net.

West Ham continued to try to get forward, and they would eventually bag a deserved equaliser 10 minutes after the break. A quick Vladimir Coufal throw-in following an errant Hugo Lloris pass found Michail Antonio in the box, who held the ball up before finding the charging run of Tomas Soucek who fired the ball past the Spurs captain.

West Ham were much the better side after the break, though Spurs boss Antonio Conte felt his side deserved more than a point, but conceded they could also have lost it at the death.

Close but no cigar…

The Hammers come desperately close to finding a last minute winner through Jarrod Bowen but it wasn't to be… 😲 pic.twitter.com/Qskkb8xmxc

“I think that maybe we deserved a bit more than a draw but at the end they also had a chance to score and [we’d] lose the game,” he told BT Sport.

“It is not easy to play against West Ham, a physical team and strong. They play long ball and you have to pay attention, we did well at set-pieces, moved the ball well and created opportunities to score.

“We can do much better because I always like to tell my players the details at the final result. Instead of winning, you have to speak about the draw.”

The Italian was, however, unhappy with the use of VAR following the decision to overturn the awarding of a penalty.

“In England they have to learn much more to use the VAR in the right way. You have to study very well and be more accurate. If there is VAR, you have to utilise it in the right way or accept the decision of the referee. If you have a TV then you have time to see. It is difficult not only for me but every coach.

“We started the season very well, we are unbeaten and we play five games and three away. In a difficult place like West Ham, Chelsea and Nottingham Forest, we are doing well and trying to improve. Now we have another game to prepare in two days against Newcastle then we think about the Champions League.”